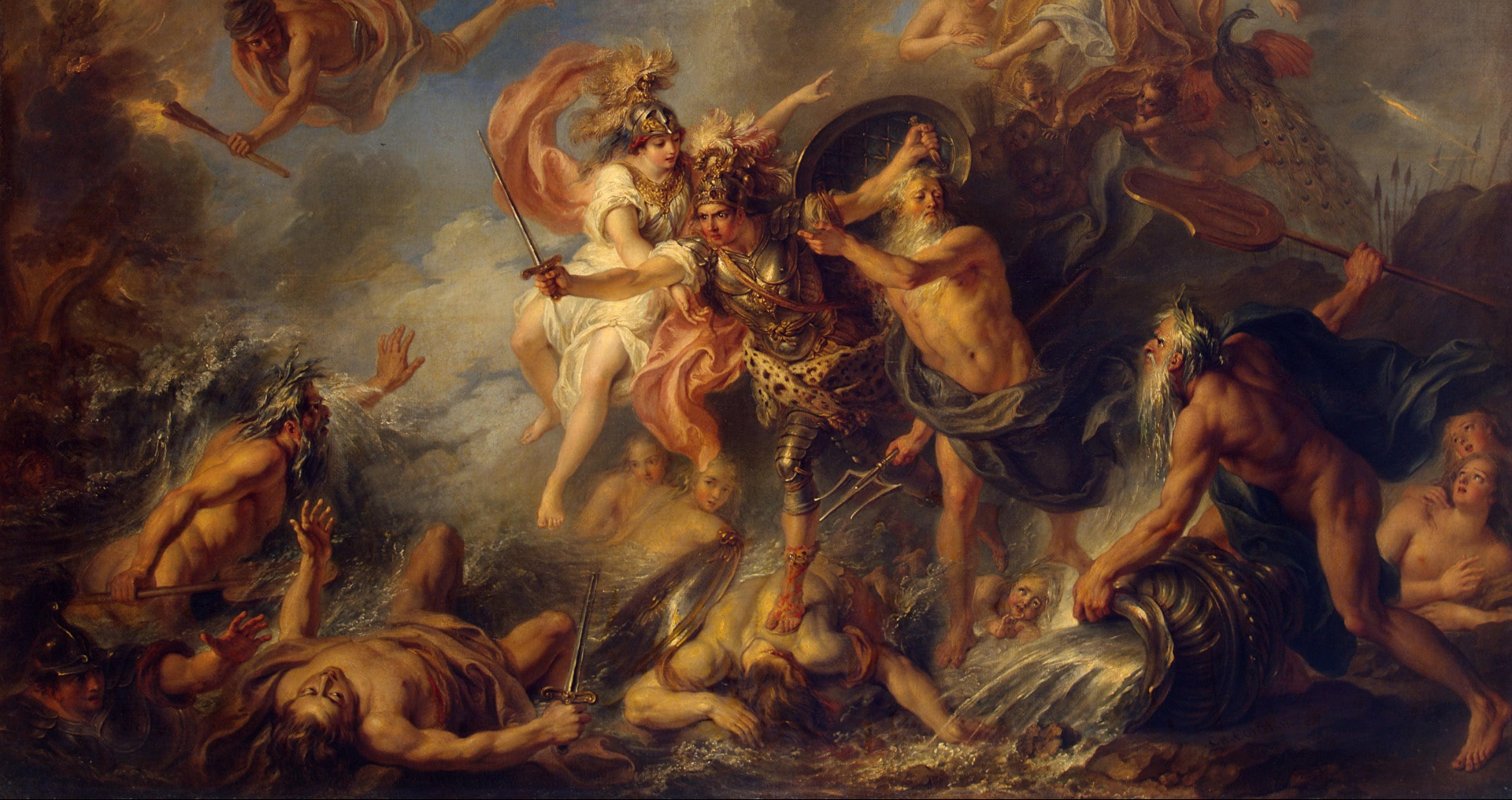 The Trojan War, for our Homeric heroes, begins with marital infidelity and succumbing to temptation, but ends with marital fidelity and overcoming temptation. While the gods are ever present in the Iliad and Odyssey, I wish to examine the otherwise purely human aspect of Homer’s two great epics and how they relate to family, and the role of marital infidelity and fidelity as it relates to wholeness and life. After all, family is one of the great Homeric concerns.

The Iliad and Odyssey can be read as standalone works. However, the two great poems should be read together. Both works revolve around the Trojan War. Both stories are intimately tied together as one story, especially through the person of Odysseus who is a major character in the Iliad and the namesake of the Odyssey.

Pseudo-Apollodorus presented Odysseus’ hand in the origins of the Trojan War by fostering the compromise which would lead all of Greece to go to war against Troy. The suitors of Helen would swear an oath to support the eventual husband of Helen irrespective of who would become her husband. Thus, Odysseus’ legacy as a family man is continued well after Homer. And if Pseudo-Apollodorus’ chronology of Odysseus is to be accepted simply on literary grounds, Odysseus was considered to be a family man prior to the Trojan War.

The place of family in finding the meaning of life is best reflected by the two heroes of the Iliad, Achilles and Hector. Achilles abandons his mother and out-of-wedlock son to win his immortality through the fame that will come in war. The sword decides all, and the idea that fulfillment in life can be found by the glory of conquest and war is all too well known to the ancient world. Nevertheless, Achilles was torn by his desire for the battle-cry and his weeping mother; he eventually sides in favor of the call of the battle-cry, but not without some consideration to his family.

By contrast, Hector is the tragic hero of the Iliad. Hector is an upstanding father and family-man, a patriot, reverent to the gods, and an honorable man. Before Virgil depicted Aeneas as the upstanding figure who embraced filial piety to the uttermost, Homer casts Hector in a truly pious light; Hector is devoted to his family, faith, and fatherland (and Aeneas is often by Hector’s side inheriting Hector’s virtues). Who cannot be moved with his teary goodbye to Andromache and his comforting actions to his newborn son whom he cradles in his arm as he prays to Jove? Hector is not only physically present with his wife and son; he is emotionally and spiritually present with his wife and son before going off to battle. The intimate moment between Hector and his family is moving precisely because of its humanness; the love reflected by Hector to his wife and son the ultimate expression of the sublime.

It was Hector, not Achilles, who was considered one of the nine worthies of the medieval age and one of the virtuous pagans according to Catholicism. Hector was remembered for his honor; Achilles for his savagery. Hector fights to defend his family and fatherland; Achilles fights for himself and his own vanity. The man worthy of praise was the man counted among the worthies and immortalized in the song “British Grenadiers.” Hector dies looking at his beloved city—his fatherland—for which he gave his life; a fateful yet glorious death if there ever was one in the midst of the carnage that was the Trojan War.

While the story of pious Hector ends outside the walls of Troy, the story of Achilles and his revelation concerning the importance of family (and life) reaches fruition in the Odyssey. Homer reveals his hand that the family is the highest good to be had in life when Odysseus descends into the underworld and reunites with the heroes of the Trojan War. Odysseus’ descent into the underworld also leads him to see the many beautiful and free-loving queens and princesses of Greece; their beauty a temptation that lesser men would fall for (as Paris did Helen). The fact that beauty is presented so loosely as Odysseus comes across Antiope, Alcmena, Megara, Epicaste, and Chloris, among others, cannot be lost on the reader given the location of where Odysseus is currently journeying—the abode of the dead. Homer presents beauty as the femme fatale in his works. Thereby equating beauty with a form of control—not that beauty should be shunned, but that there is a fine line between beauty as an allure bringing about salvation and beauty as a controlling force that ultimately brings about death and destruction. Homeric beauty is related to the family, the false hope of beauty found in the individual cut off from filial relationships.

In his encounter with Agamemnon, Odysseus is shocked to see the ghost of the great king who led the Greek army to conquer Troy. Agamemnon answers that it was not misfortune decreed by the gods that brought his death, but marital infidelity that led to his murder. “Odysseus, mastermind of war, I was not wrecked in the ships when lord Poseidon roused some punishing blast of stormwinds, gust on gust, nor did ranks of enemies mow me down on land—Aegisthus hatched my doom and my destruction, he killed me, he with my own accursed wife.”

Agamemnon continues to recount his murder by Aegisthus and betrayal from his own wife, Clytemnestra. It is interesting to observe that Agamemnon was killed at a banquet feast. The literary theme of death by eating is also something that should be well-familiar to a Christian readership, as well as to readers of ancient folktales.

It is at the dinner table where betrayal or poison occurs—the place where humans are to feel at ease and comfortable, merry and drunk, loosening their fears and embracing the joy of company. The association of hedonism with destruction, for it is in a moment of pleasantry when we are easily caught off guard, is an ancient trope that begins with Homer. Agamemnon should have been home, safe and secure, but instead is more vulnerable than ever because of Clytemnestra’s infidelity ultimately leading to his death.

Euripides’ tragedy Iphigenia in Aulis presents Agamemnon in his naked vanity (while also casting Odysseus in a more negative light than Homer does). Agamemnon sacrifices his lovely daughter, Iphigenia, to the gods to procure safe passage to Troy. Agamemnon’s own bloodline is expendable if the glory of victory in battle is secured. Agamemnon’s wanton and willful sacrifice of his daughter is but another example of filial destruction—something Yahweh forbids in Genesis and establishes the principle of the sacredness of life in the Abrahamic tradition. Again and again, whether it is in the Iliad, the Odyssey, or even other Greek plays and poems, the dissolution of the family is always accompanied by death.

Agamemnon’s murder which was, in part, caused by Clytemnestra’s infidelity, leads to a collapse of trust in Agamemnon when he tells Odysseus not to tell his wife, Penelope, the total truth in all matters. The betrayal of trust in relationship is the worst of sins in Christian tradition. Dante placed such traitors in the ninth circle of hell: Those who betrayed their friends, their countrymen, and more horribly, their family. While Homer foreshadows Odysseus’ triumph when Agamemnon quips that Penelope will never betray him, the damage to Agamemnon is complete and irreversible. Not only is he dead, he cannot trust anyone as indicated in his dialogue with Odysseus—moreover, he cannot trust the person who should be trusted most (one’s spouse). The relational animus of man’s social nature is destroyed and fulfillment through a relationship can never be consummated for those who have trust issues.

Upon leaving Agamemnon and meeting Achilles, Odysseus showers the great warrior with praise. Achilles, however, scoffs at Odysseus’ praise. Achilles rebuffs the laurels bestowed on him by declaring he would rather be alive as a poor slave tenant farmer, with his mother, and with his son, than be the lord of the dead. In fact, family is the only thing on Achilles’ mind upon meeting Odysseus as he asks about his son, “I’d rather slave on earth for another man—some dirt-poor tenant farmer who scrapes to keep alive—than rule down here over all the breathless dead. But come, tell me the news about my gallant son.”

Homeric irony is on full display here, especially if the Odyssey is read after the Iliad as companion pieces. Achilles, the man who didn’t concern himself with life and chose war (death) over family comes to understand the importance of family, and therefore life, only when he is in the abode of the dead. This revelation for Achilles comes too late for his soul. He is trapped forever as master over the “breathless dead.” As Achilles’ lament goes on, he weeps to have the opportunity to return to his father’s home and to teach men the ways of life rather than lust and conquest.

Grieving, Achilles is comforted by Odysseus as he informs him what has become of his son (Neoptolemus). This is a touching moment, the contrast to Hector’s goodbye in the Iliad that brings about the completion of the contrast between the two heroes of that work. But Hector held his son in his arms and comforted him in all his feebleness; the strength and courage of Hector giving strength and courage—comfort—to Astyanax. The scene of Odysseus telling Achilles the fate of Neoptolemus is touching because it is the revelatory moment for Achilles about the importance of family. Achilles eagerly waits to hear the news of what has become of his son because he cannot watch his son to know himself. With tears coming down his eyes he had begged Odysseus to tell him what any father wishes to know: What has become of his son.

While undoubtedly moving, this scene stands in stark contrast with Hector. Hector, as mentioned, was physically, emotionally, and spiritually present with Andromache and Astyanax in an unforgettable human moment. Achilles does eagerly wait to hear the news of his son. But he is detached, a gnostic ghost without a body who cannot provide warmth and comfort to his son; neither can he help him nor congratulate him. Achilles is left in anguish from his newfound knowledge of what is truly important in life and where the desire of man is made whole.

Achilles left his mother and son to win immortality in war. It was this immortality to be won in war that Achilles thought would satiate his desires. Only in death does Achilles see through the veil that no amount of death and conquest can satisfy man’s yearnings. Instead, it is the simple life—the family life—a life spent in relationship with spouse, children, and friends (and countrymen) where desire is contented.

This revelation as to what the meaning of life is comes roughly at the half-way point of the Odyssey, thus setting the stage for the rest of the journey home. And home is where the family is. Agamemnon should have been safe at home. Reuniting with his wife and kingdom, Agamemnon’s parousia is turned against him as he is lured into a trap set by a scheming usurper and unfaithful wife. In death, Achilles learns that the glory he sought in war was vain and that the life of happiness is found in the practical wisdom and love of the simple life with family that he is now deprived of. The fates of the other heroes of the Iliad are a sharp contrast with the forthcoming fate of Odysseus.

*This essay was part of my regular column at TIC.